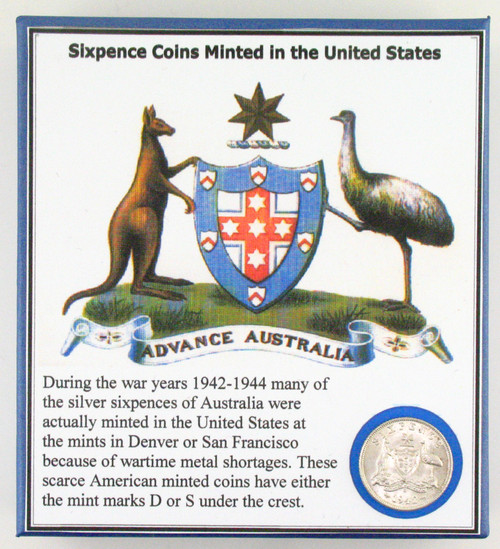 During World War II the minting of coins took secondary importance to military needs. As an example in the United States the metal nickel was a strategic war material so it was taken out of our "nickels" and replaced with silver between 1942-1945.

In Australia, one of the countries still using sixpence coins at the time, production at the mints in Sydney and Melbourne could not keep up with the demand for coins. In an agreement between governments, the mints at Denver, Colorado and San Francisco, California were utilized to strike sterling silver sixpences for our Australian allies during the war years of 1942-1944 . These scarce American made wartime sixpences can be identified by the letters D for Denver and S for San Francisco just over the date on the coins. These nearly uncirculated coins were put away by a collector in Australia in the 1940's.

Your Australian silver sixpence, all of which are over 75 years old, will arrive in an attractive gift box complete with a description of this scarce treasure from "down under".

The perfect sixpence for a 2022 bride.

Lucky Sixpence Coin for the Bride, You Choose the Date

A Classic Sixpence from the Days of the Penny Arcade

The perfect sixpence for a 2022 bride.