Victoria's reign of 63 years was longer than any other British monarch, until Queen Elizabeth surpassed this mark in 2015. Known as the Victorian era, this was a period of industrial growth and expansion of the British Empire. Sixpence coins until 1887 featured the “Young Head” of Victoria, those from 1887 on featured her more mature profile. All of the sixpences issued during Victoria's rule are sterling silver.

In 1887 Great Britain celebrated Queen Victoria’s Golden Jubilee of her 50 year reign as monarch. A special sixpence coin was issued in 1887 to commemorate the event. Many of these sixpences were hand enameled on one side and used in pendants, pins and as broaches.

Edward became King of Great Britain upon the death of his mother Victoria in 1901. A very popular King, the Edwardian era saw great technological changes, including powered flight. Known for his good manners and diplomatic skills, he forged important diplomatic alliances with other European rulers.

The coins feature Edward's bearded profile on one side and the crown on the reverse. All of the sixpence coins issued under King Edward VII are sterling silver.

King George V ruled in turbulent times that included not only the First World War but the coming to power of Aldolf Hitler in Germany. He was not considered an intellectual, but he established family values appreciated by the middle class. Sixpence coins of George V issued prior to 1920 are sterling silver, while those minted from 1920-1936 are fifty percent silver. The earlier coins featured a lion standing on the crown, showing Britain's role as a world power. The coins after 1927 have the oak leaf and acorn design, symbols of strength and stability.

Described as the reluctant king, George VI assumed the monarchy when his elder brother Edward VIII abdicated the throne to marry the divorcee Wallis Simpson. George, known as Bertie, never thought he would be King. He overcame a serious stutter, which was portrayed in the Oscar-winning movie The King’s Speech, to lead Britain through the dark days of World War II. His live radio broadcasts throughout the war gave hope and inspiration to the British people.

Queen Elizabeth II has reigned longer than any other British monarch other than Queen Victoria. She celebrated her Golden Jubilee as Queen in 2002. The divorce of her son Prince Charles from the popular Princess Diana, and Diana’s death in a car crash in Paris were personal low points during her life. She was very involved in the marriage of her grandson Prince William to Kate Middleton, who had  the customary sixpence coin in her shoe on her wedding day.

None of the sixpence coins issued during the reign of Queen Elizabeth have any silver content. The last sixpence coins circulated in 1967, although some were issued in 1970 in special proof set editions for collectors.

How Big is a Sixpence? 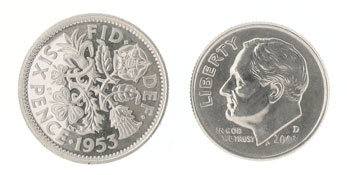 Sixpence coins measure 3/4 inch in diameter, or 19.3 mm. That is slightly larger than a U.S. dime.