A 454 Year Old Sixpence of the First Queen Elizabeth 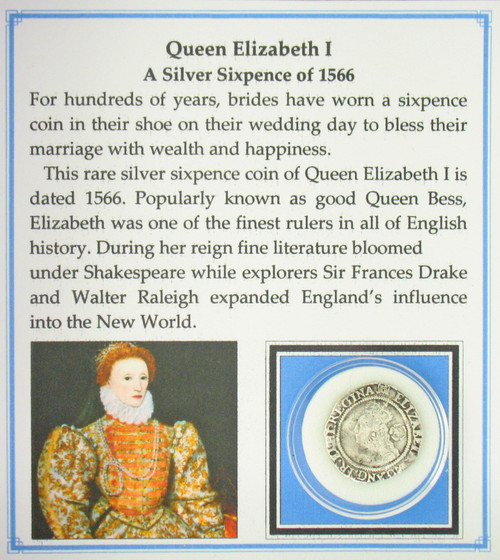 A 454 Year Old Sixpence of the First Queen Elizabeth

During the early 1600's it was customary for the Lord of the Manor to give his bride a piece of silver as a wedding gift. This was symbolically represented by a sixpence coin. It later became a tradition to include a sixpence in the dowry that was given by the bride's family to the groom. That tradition of the sixpence as a symbol of good luck continues today. The expression something old, something new, something borrowed, something blue, and a sixpence for your shoe still rings true with every bride. The tradition says if a bride puts a sixpence coin in her shoe her wedding will be blessed with wealth and happiness. Queen Elizabeth's reign, known as the Elizabethan era, is famous for the flourishing of English drama under William Shakespeare and world exploration by Sir Frances Drake and Walter Raleigh. Elizabeth ruled during the defeat of the Spanish Armada in 1588, considered one of the greatest victories in English history. She ruled during the Golden Age, a time that is fondly remembered by the English people. Your remarkable 454 year old sixpence, dated 1566, can be removed from the custom protective holder for the wedding day, and later replaced to save as a family treasure and heirloom to pass down to future generations of lucky family brides. A silversixpence.com exclusive, only one coin available.

Lucky Sixpence Coin for the Bride

A 1787 Sixpence Used in the American Colonies

A Classic Sixpence from the Days of the Penny Arcade